Paddling in wind and waves with a Greenland paddle

Paddling in wind and wavwes is getting more and more popular. The kayakcourses for rough water are increasing. But for most paddlers it can be both tiresome and intimidating to paddle in a lot of wind and in rough seas. The Greenlanders developed several techniques for use in rough weather. There were many reasons for the Greenlanders to paddle in a storm. For example, professional kayak paddlers could easily approach seals during a storm. Noise and movement made the seals less attentive, which could be profitable for a hunter who mastered the conditions. However, it seems that the most common reason for a Greenlander to be out in a storm, was that the weather changed too quickly to allow him to get back home or to a shelter. Violent storms can brew quickly in Greenland, for various reasons including the large inland ice. There are many stories of Greenlanders who were blown out to sea and had to spend several days paddling home. Within the Greenland inspired community there is a stormroll and also a stormpaddle of sorts. Both will be descriped below. And if you doubt it, the Greenland paddle works excellent in both surf, waves, wind and rough seas.

A lot of people speak of the storm paddle as a thing in its own right. The term is also wrongly used about a regular Greenland paddle. It's hard to say how this usage came about. What's certain is that in Greenland, where one often paddled in bad weather, people often had fairly short paddles. The American kayak researcher John Heath gives the measurements of a storm paddle as about one 'arm span'. This means that a storm paddle can be about as long as the height of the user. In other words very short! The shaft is usually very thin — two hands breadths is not uncommon. The blades should be narrow, especially close to the shaft, where one is going to hold the blade when paddling. When paddling, you constantly change your grip and move the paddle from side to side, this is often known as 'the sliding stroke'. The advantage of this is to have as little of the blade as possible exposed to the wind, as well as keeping your fingers in motion against the cold. Not everybody likes this technique, but some use it just for fun and not in a storm.

Many paddlers use the stormpaddle as a spare paddle — something it's very well suited for. And in this case, the length of the kayak's foredeck should be a factor in deciding the length of the paddle. If it's suitably long, it will lie flat against the deck, and be ready for use, either as a spare or for rolling with. That said, if you carry a stormpaddle as a sparepaddle... well then you should be able to use it and be familier with the above mentioned sliding stroke.

Even though most rolling and support techniques are used in rougher conditions, it's the forward ending roll that is called the "storm roll". As always with Greenlandic techniques, there are many variations. Here we'll cover the basic one, the front to front roll. 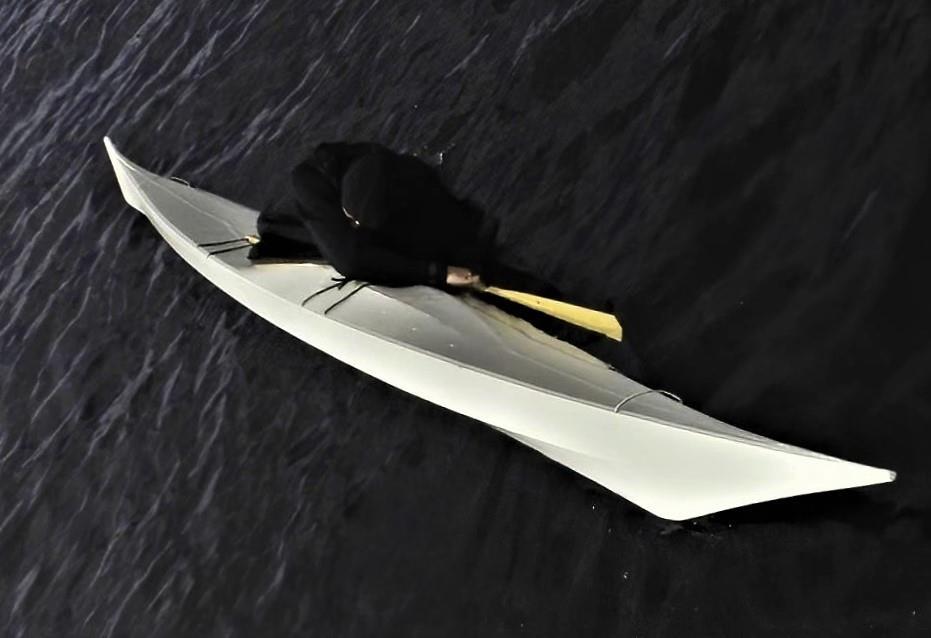 1: The starting position is the same as for the standard Greenland roll. The asymmetric grip on the paddle while it lies along the foredeck. Lean your upper body forwards and tip over to the opposite side of the one you intend to get up on. 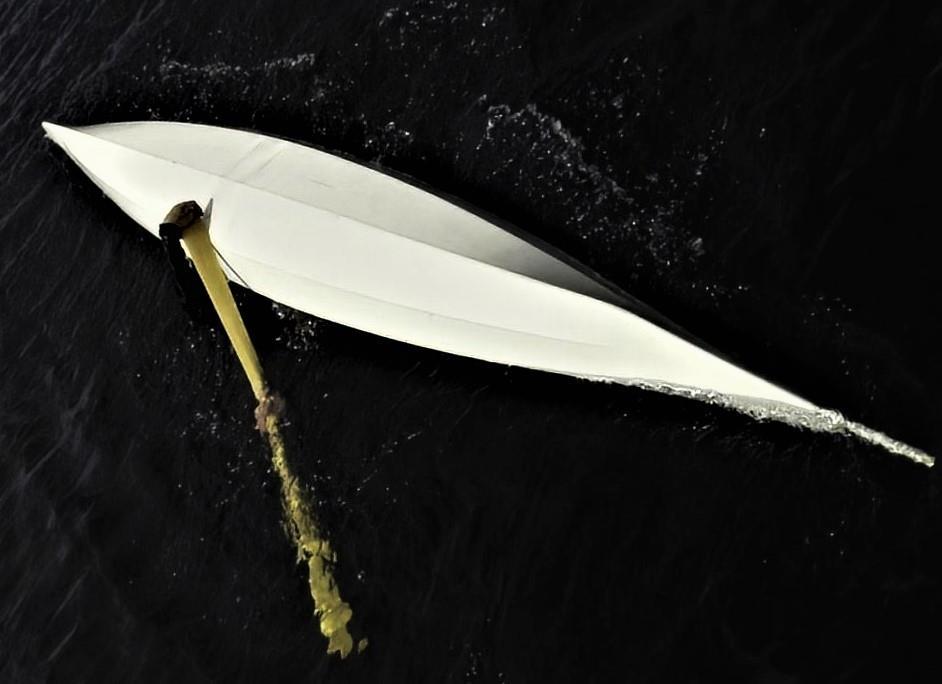 2: Keep leaning forwards, and sweep the paddle out to the side. As far as possible, the paddle is kept horizontal to avoid having it dive too deeply when it's time to apply force to it and get up. Move the paddle out at a 90-degree angle to the kayak. 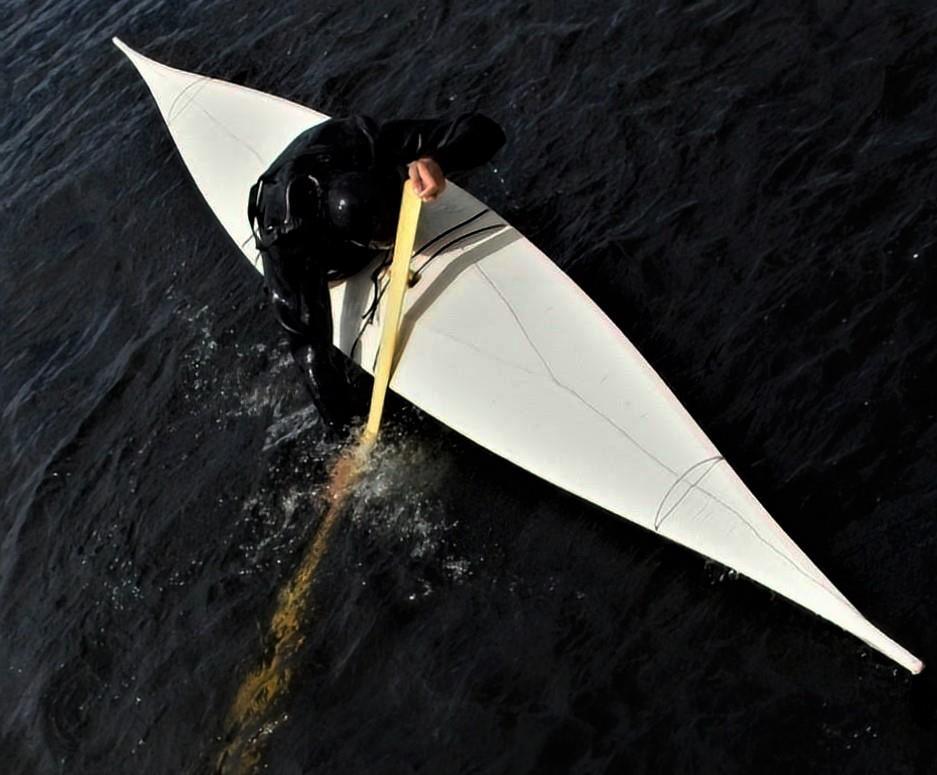 3: Grip the kayak with your knees, and brace your feet against the footrest. With a combination of a powerful hip snap and a downwards thrust of the paddle with your right arm (in this case), the paddler surfaces. The paddle will usually end up fairly deep in the water. This is important to keep in mind in order to avoid the familiar involuntary second roll, which can easily happen after a well-executed roll with a lot of speed. 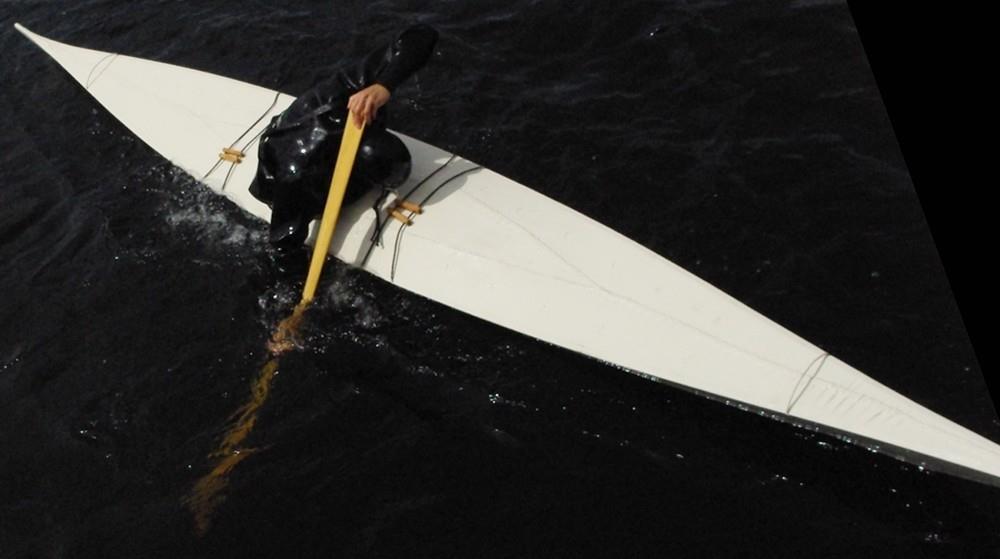 A variation where the paddle is held behind the neck.

The book contains a selection of articles about Greenland kayaks and many amusing pictures. Among other things, you will find here is a description of a seriously rugged kayak trip that almost ended in disaster. you can buy it here. 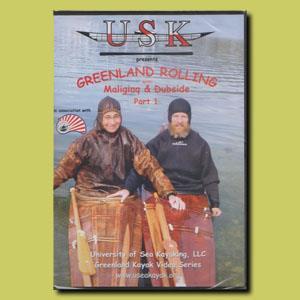