"Eskimo roll" is a phrase we've all heard, but it's a mystery to a lot of people. When you mention kayaks to someone unfamiliar with them, it's the first thing they'll usually ask about, a magic trick that has burned itself into the Norwegian kayaker's consciousness, dating back to the days of polar explorer Fridtjof Nansen. But let's establish one thing right at the outside - rolling is not a lifesaving method for us modern paddlers. The situation for the Greenlanders some form of rolling was their only usable rescue technique. The reason was that they were often out hunting by themselves, and swimming in cold water without wetsuits or the like was nearly 100% fatal. Therefore, they developed kayak rolls into a sort of art, which included a ton of different acrobatic exercises - variations on all possible conditions involving a capsized kayak. They learned to master the art at a high level, but many of them still died at sea. Around 1920 it's said that ca. 20% of all deaths in Greenland were due to kayak accidents. If we assume a fairly even distribution of men and women, it means that every fifth man died in his kayak. For sea kayakers today, the roll is a nice supplement to other rescue exercises, and learning to roll is, in my opinion, VERY useful. It's fun and easy to learn. There are almost infinite possibilities for further development, and it provides a fantastic way of getting to know yourself and your kayak better. The Greenlanders' first choice of the roll is a variant called "Kinnguffik Paarlallugu" in Greenlandic, which means simply "to capsize on one side and come up on the other". We normally call it the "Standard Greenland Roll". "Standard" because it's the most common version. It's easy to learn, easy to perform, and reliable under all conditions.

You can learn this the hard way by training alone. That will work for some people, but badly for most people. If you want to learn it in a few hours, you should follow some simple advice given here. First, mastering a roll is mostly connected with how well you feel at home in the water. People with mild hydrophobia will have a harder time than natural swimmers. Therefore, it's a good idea with some form of acclimatisation first. Hot water is an advantage, and bathing or swimming right before rolling practice is a LARGE advantage. It's necessary that you can reliably exit the kayak after capsizing. You should also dress properly - cold water is stressful, so dress according to the temperature with wetsuits as appropriate. A nose plug and diving goggles or a full diving mask also reduce stress, and can freely be used while training. Your kayak should be well padded so that you don't slip around in it but can brace with your knees. In Greenland kayaks, you can also move further forward in the kayak. This makes it easier to lean backwards and is an advantage while practising.

It's a good thing to have somone to practice with. It helps with the saftety and is a great way to learn also changing roles, roller to helper.

Here you see one helping position where the helper keeps the roller safe, and can provide tips.

The roll step by step 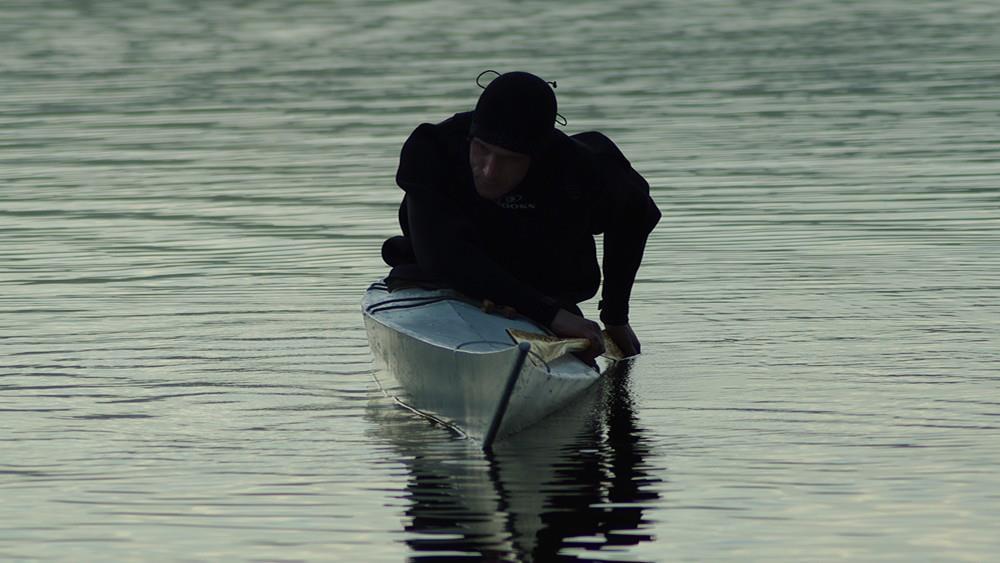 Starting position: The blade of the paddle is held at the end with the left hand (not too tight) and at the shaft/blade transition with the right hand. During the whole roll, the right arm is the most active. The paddle is placed flat against the left side of the foredeck of the kayak. You lean over to the left side and hold the paddle in this position until you're completely upside down.

Move the blade of the paddle along the surface until it's about at a 90-degree angle to the kayak. Be aware of the angle on the blade, otherwise, the paddle may submerge. You'll use this sweep stroke to raise your upper body upwards in the water - stay there! As long as you're in the water, you're weightless.

The kayak will now right itself. You're still leaning backwards, and let your head right itself last of all. Be careful not to tip over to the left again by putting a little weight on the paddle.

You straighten up and hold the paddle out for support.