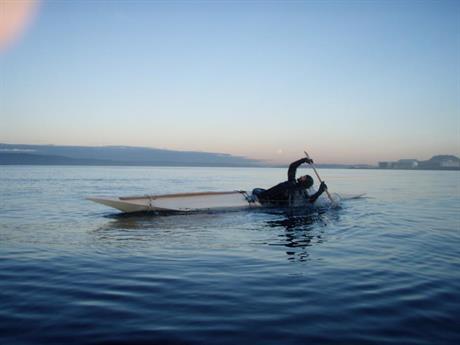 Torleif Holm from Trondheim writes about the East Greenland kayak he bought in November 2006.

Thanks for the inspiring meeting we had in your impressive workshop. Thanks for being a kind host, too. Now I've tried it on flat water. Unsurprisingly, it was more wobbly about the centre than I'm used to, but it gave very good support once I leaned over somewhat. The carving turns were a bit unusual, to begin with. (I'm used to lifting with my knee and pressing the side down.) Here I just had to think about tilting and the gunwale came underwater. After a good hour of paddling in the canal and harbour, I began to feel that stability was safe and predictable. The craft is easily manoeuvrable, stays on course and is fairly fast. It's almost too good to be true. It's blessedly easy to propel. There was a storm warning here for today, but the trip passed in complete calm, so I don't know about the response to side winds yet. When I got back to the dock, I took a few rolls, and they were easy. Also, I did not have any problems maintaining balance when I got up, either. You're right that it's very easy to tilt the kayak and lie sideways on the surface of the water. I didn't quite dare to stop sculling, but I didn't need to scull very much.

Now I'm looking forward to trying the kayak in some wind and waves!

PS: I was out paddling alone this morning, so I didn't get a picture of the kayak on the water, but it's coming!

I'm very satisfied with the kayak. It seems like it'll be easy to keep pace with other (some stronger and more experienced) paddlers. It would be an honour to appear on your web page. That's actually the moon you see in the picture. Looks like I got some help with my rolls from the moon's gravitational pull... Greetings from Torleif 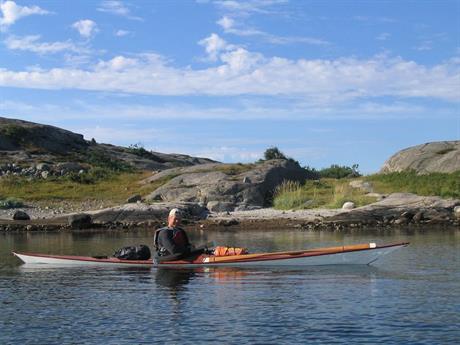 A little feedback on the kayak, which I've tried a bit more during the weekend. We went for a little trip in Brevikstrømmen, through some frozen slush and between ice flakes. I had to be careful because of the canvas, but everything went well. Good conditions, slight breeze and a quiet sea, got a good impression of the kayak. I'd have to say I'm very satisfied. The kayak lives up to every specification. It's easily paddled, easy to manoeuvre, turns when you lean over and goes straight ahead when you want it to. What surprised me the most was the speed, I think it's fast. I'm not an especially good paddler, but a quick spurt left my GPS showing 8.2 knots, and I'm happy with that. Very fine kayak. I look forward to testing it in rougher sea.

During the late summer of 2006 Bernt wrote again:

The vacation is over and it was a blast. Excellent weather and conditions, although the wind forced us to stay ashore one day, not that it mattered. We had a great week starting from Hvaler. Evy and I paddled south to Strømstad and Grebbestad, stopping by Kosterøyene on the way home. I have to give you feedback on the kayak. It performed admirably under the whole voyage, and I'm also satisfied with the replaceable keel. It's fun with a kayak that gets people's attention, and you're known as a kayak builder in Sweden, too. Swedes came running across the rocks to ask who had built the kayak. They obviously recognized the shape and nodded knowingly when they found out that you had built it. They described the kayak as "jättefin". Back to something more practical, the kayak performed extremely well. I sometimes felt a lack of packing space compared to my earlier fibreglass kayak, but I've gotten the hang of it now. I've also confirmed that I don't need to be extraordinarily careful with the canvas skin, it's tougher than you'd think when you hit rocks. And like I mentioned before, the canvas kayak feels special. The smooth way it glides through the water is even more soothing than a normal kayak. The West Greenland kayak turned out to be a great kayak for long trips. Thanks for preserving old building traditions this way. Am sending you a picture of the kayak and its proud owner.

Talk to you later, Bernt